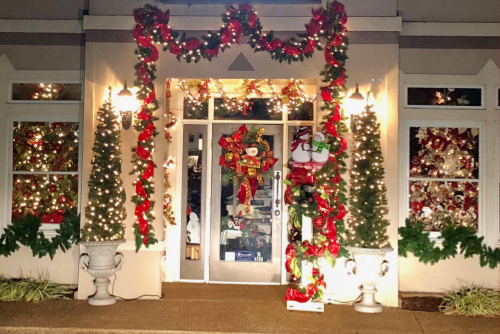 The twelve businesses that entered the competition each paid in $25.00 with the winners of the competition choosing the charity that the money would be donated to. There were several winners. 1st, 2nd, and 3rd along with an honorable mention. The money donated to charity is $100, $75 and $50 respectively. The competition was judged by a group of unbiased judges from out of town. There was also a “People’s Choice” award that goes to the business with the most Likes on the competition’s Facebook post. The winners for the first annual City of Dyersburg Storefront Decorating competition are:

The People’s Choice Award goes to Merry Castle with 619 likes on Facebook. Hilltop House was second with 464 and Buff City Soap was third with 417 likes.

Each of the winners will also receive a display sign designating them as a winner, a mention in the newspaper, and the People’s choice winner will receive a Pizza party for up to 10 people.

The volunteers at The City of Dyersburg and with Downtown Development would like to thank all those that participated in the competition and for those businesses that decorated outside of the competition. This Christmas season is off to a great start with all the decorated storefronts throughout the city and the new lights around the Courthouse Square. And best of all, a couple of local charities will receive much-needed donations.